W.J. Castle, P.E. & Assoc., P.C. (CASTLE) was tasked with locating and then repairing a leak in a 7-foot diameter water supply pipe. This leak amounted to a water loss of up to one million gallons per day and had been leaking for the past 20 years. Due to the pipe being 35 feet underground, and other concerns, excavating and repairing from the outside of the pipe was not an option. The repair had to be carried out from the inside of the pipe. Due to the importance of the plant and the districts, it supplies potable water to, the pipe could not be dewatered and the flow could not be stopped completely.

A Remote Operated Vehicle (ROV) was utilized to do an inspection of the pipe due to the strong water flow in the pipe (over 2ft/second). During that inspection, the cause and location of the leak was located in a pipe joint. The ROV images provided sufficient information for a repair to be devised.

This repair required that a single diver perform the installation an internal joint seal after descending 25 feet down a riser pipe and then 130 feet horizontally through the seven (7) foot diameter pipe to get to the repair location.

Safety was of utmost importance as was the ability to communicate the progress to the client. Utilizing the JW Fishers VRM-1 and MC-1 Mini Cam, the diver was able to provide real-time viewing of the repair for the client through Live Video Feed. The leak was fixed on time, within budget, and in accordance with all safety procedures.

The pipe was losing approximately one million gallons of water per day since the construction of the plant, approximately 20 years prior. The purpose of an internal inspection would be to locate any discontinuities in the pipe and joints that could be contributing to the leak observed by NJDWSC. The portion of the pipe that needed inspection extended approximately 130 feet down-flow from the 60-inch diameter steel riser pipe used to access the seven (7) foot diameter pipe.

The pipe had never been inspected internally by a diver since they were unable to stop the water flow which presented a safety risk for a diver. Therefore, CASTLE proposed using a Remote Operated Vehicle (ROV) to do an inspection of the pipe due to the strong water flow (over 2ft/second) in the pipe.

The CASTLE inspection/ROV team consisted of five (5) personnel. Since the 60-inch diameter access pipe was too wide for a tripod system, CASTLE used a small gantry crane and electric hoist, to lower a diver and the ROV down. The diver went down 25 feet underwater to the entrance of the seven (7) foot diameter pipe and held the ROV cable which was tethered out as the ROV began its inspection.

The ROV inspected inside of the pipe and found the cause of the leak 130 feet into the pipe. The underwater ROV used was the Deep Trekker DTG2. Real-time video from the ROV’s high definition camera was displayed on the LCD screen integrated into the ROV’s controller. The video was recorded using an external recording device. The photo below shows the underwater ROV unit.

The cause of the leak was located at a joint between a concrete pipe section and a steel pipe section. The opening appeared to vary in width from hairline to a maximum of 1/4 inch wide. The cause of the ongoing and increasing problem for 20 years had been located.

Once the cause of the leak was identified, CASTLE then was asked by NJDWSC to develop a repair solution that would be safe and effective. 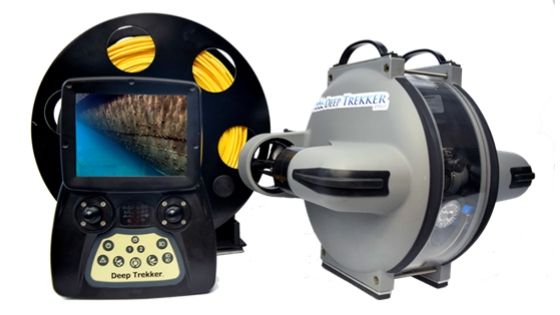 CASTLE, along with Hydro-Marine Construction Company, Inc. (HYDRO) the diving contractor, did extensive in house experimentation and preparation to devise a practical way for one diver to install the internal expansion collar in the seven (7) foot diameter pipe with water flowing and only hand tools and a headlamp. The plan needed to enable the diver to carry and install all components of the internal expansion collar and necessary tools 130 feet into the pipe to the location of the leak.

Because the pipe serves over 13 other districts (including Newark Airport), it took over a year to coordinate a “shut down” of the pipe to significantly reduce the water flow rate to less than 0.5 ft/second so that a diver could safely enter the pipe and perform the repair. The repair required massive coordination efforts for safety and operational effectiveness.

CASTLE coordinated with NJDWSC to devise a “Lock Out-Tag Out” system to control the water flow. The flow control points were in various locations throughout North Jersey, therefore, a set of preset combination locks, set by CASTLE and provided to the various water districts were used to lockout the flow. Real-time video of these locks in place was sent to the project location to ensure diver safety. Once the repair was complete the combinations were provided to the various districts for lock removal.

The nature of this diving is classified as “confined space” and/or “penetration diving” and has its own set of safety concerns and requirements. A detailed Plan of Action / Safety Plan was extremely critical. OSHA regulations were adhered to and a six (6) person dive team was utilized along with an onsite Dive Supervisor, Project Manager, and Technical Assistant for a total of nine (9) team members. The experienced commercial dive team consisted of three (3) divers with three (3) tender/back-up divers. All were certified commercial divers with extensive experience.

All divers had communication with the Dive Supervisor through a two-way communication system. Surface supplied air (by air compressors – no SCUBA) was utilized and each diver had a “bail-out” air tank attached directly to them. The “dive rig” which supplies the diver with air and communications incorporates a diver safety line as well. A Gantry Crane, with two power hoists, was placed over the 60-inch diameter access pipe and was used to lower and raise the divers in and out of the pipe.

Initially, the primary diver entered the pipe and verified a workable and safe water flow rate. If the flow was too strong the dive and subsequent repair would have been aborted. The primary diver then proceeded 130 feet to the joint to be repaired, while a secondary diver entered the water and was positioned approximately 10 to 15 feet inside the seven (7) foot diameter pipe. A third, fully-suited (excluding dive helmet), back-up diver remained on the surface ready to enter the 60-inch diameter pipe and take the place of the secondary diver if that diver needed to travel to assist the primary diver.

Once the team was in place, the primary diver verified the conditions observed by CASTLE using the ROV images at the leak location and then traveled back to obtain the internal expansion collar components and necessary tools that were passed down through the 60-inch diameter pipe. The primary diver then took the items 130 feet down into the pipe to the location where the repair was needed.

The diver, utilizing the JW Fishers VRM-1 and MC-1 Mini Cam, was able to provide real-time viewing of the repair for the client through Live Video Feed. The repair was completed in March 2019 between 12 pm and 8 am. 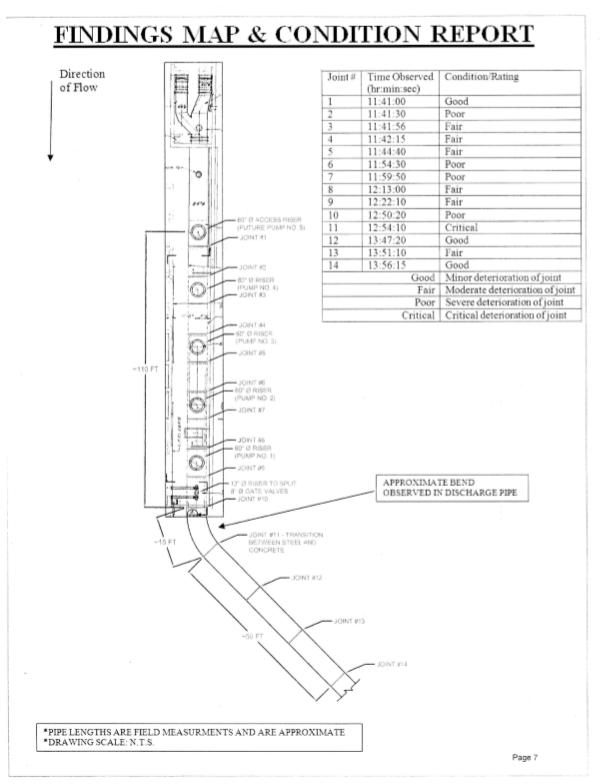 Due to the exceptional scheduling, personnel, and pre-preparation plan, this project was planned for shut down for eight (8) hours. The actual time of the repair was only three (3) hours. The leak was slowed and then eventually stopped.

This repair was the first phase of a two-phase solution: phase one was to first slow/stop the leak and then phase two would be to excavate on the outside of the pipe and seal around this joint with concrete. Since the pipe was buried at approximately 35 feet, this second phase would be costly and have its own set of risks. Therefore it was decided to wait and see how much the flow was reduced from the phase-one repair.

Using innovation, creativity, and skill CASTLE and HYDRO were able to successfully complete the project on March 2, 2019, in a dive that was under three (3) hours. CASTLE was the prime/leader in this repair with HYDRO as the sub-contractor. CASTLE and HYDRO reduced the leak by 99% initially, and within one month was reduced by 100% after repair. The repair was a complete success with minimal to no interruption of water service to customers. The cost of engineering and repair was less than $85,000 inclusive. 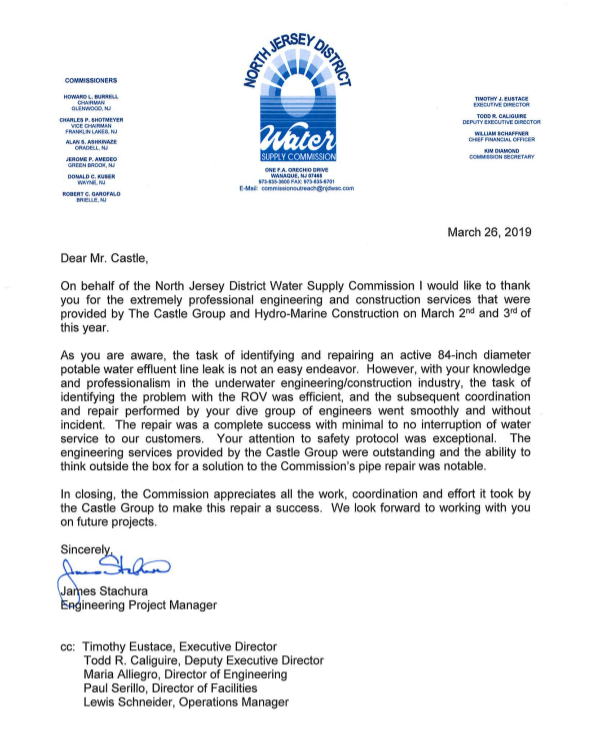 Protections for Reporting
Fraud in NY